The Jamarat are three stone pillars which are pelted as a compulsory ritual of Hajj in emulation of the Prophet Ebrahim (a.s.).

The Jamarat three stones represent the three locations where Ebrahim (a.s.) pelted the Shaitan (Satan) with stones when he tried to dissuade him from sacrificing his son Ismail (a.s.). The pillars are called ‘Jamarat-al-Ula’, ‘Jamarat-al-Wusta’ and ‘Jamarat-al-Aqaba’.

One of the purposes of the Hajj is to recall, while in Mina, how a 94 year old father brought his 8 year old son here for sacrifice. Ebrahim (a.s.) had first left his wife and newborn son, Ismail (a.s.) in the desert upon Allah’s command. Then while returning after 8 years to them he saw a dream wherein a man told him that Allah (swt) wanted him to sacrifice his son. He saw the same dream for three consecutive nights and as he was a Prophet, his dreams were a form of Wahy (Divine Instruction).

He realised that Allah (swt) wanted him to sacrifice his son for whom his heart was overfilled with love and emotions. He went to his wife and asked her to dress up Ismail (a.s.). Ismail (a.s.) was overjoyed that his father had come after such a long time and was now taking him out for a walk. When Hajra (a.s.) asked, “Where are you taking him?” He replied, “To meet a friend.” 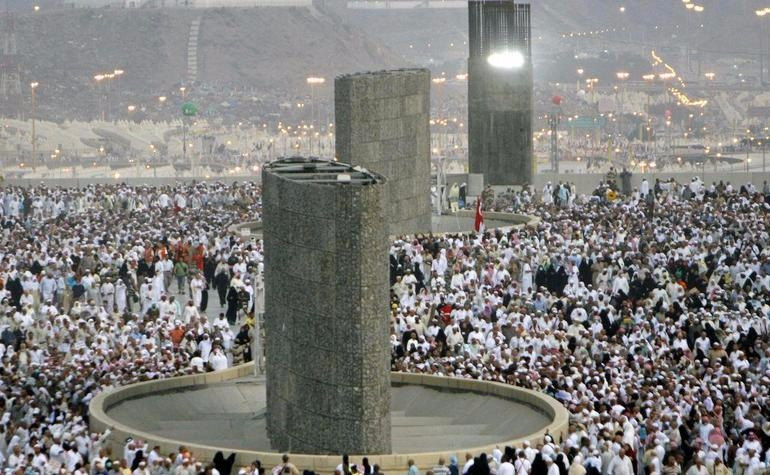 They then reached Mina. Here Ebrahim (a.s.) asked his son that your father has seen such a dream, what is your opinion about it? The reason for asking his opinion was not to ask his opinion in deciding whether to go ahead with the command or not. It was to assess whether his son will allow him to follow the command freely or will he have to forcibly carry out this order, in other words, he asked this to test the intensity of love for Allah in his son’s heart. The son replied, “My father, obey the command given by Allah. You will, Insha’Allah, find me steadfast. Give my shirt to my mother as it will be a source of comfort for her and wrap me in your own shirt. Put me face down so you can’t see my face, lest you hesitate in carrying out my slaughter.”

The skies and the earth witnessed that Ebrahim (a.s.) tied his son and laid him down. Now this was very unacceptable to Shaitan so he first went to Hajra (a.s.) and asked her, “Do you know where Ebrahim has taken your son?” She replied,” To meet a friend.”He said, “By meet a friend he meant to meet Allah. He is going to sacrifice him!” She said, “How can a father sacrifice his son?” By mistake, Shaitan uttered, “It is Allah’s command.” On hearing this Hajra (a.s.) replied, “If this is Allah’s command, then even hundred Ismails can be sacrificed in this way.”

Ebrahim (a.s.) then laid Ismail (a.s.) down and put his knee on his neck so that he may not move. Then he faced the sky and called to Almighty Allah that, “Oh Allah! If you did not like the presence of love for Ismail in my heart, I seek your forgiveness.” Then he proclaimed Allah’s name and placed the knife on Ismail’s (a.s.) throat. He would rub the knife but it wouldn’t cut, Allah (swt) had taken the quality of cutting away from the knife.

Allah (swt) was pleased with the sincerity of Ebrahim (a.s.) and sent a white, big-eyed sheep with horns in replacement of Ismail (a.s.) which Ebrahim (a.s.) sacrificed instead. This is the basis for the offering of sacrifice animals by the Hujjaj and by all other Muslims at the time of Eid-ul-Adha.

Note that the views of the Jews and Christians greatly differ from Muslims with regards to who the sacrificial son was and where this incident took place. In order to enhance their prestige and honour they have attributed the sacrificial son to Ishaq (a.s.) who is the forefather of the Jews and Christians rather than Ismail (a.s.) who is the forefather of the Muslims. They have also placed the setting to be in Jerusalem rather than Mina. It is clear, by looking at scriptural evidence that the sacrificial son could only have been Ismail (a.s.). For example, in Genesis 22:2 Abraham is commanded to take his only son for sacrifice. As Ismail (a.s.) was 13 years older than Ishaq (a.s.) and both were alive at the time of their father’s death, logically Ishaq (a.s.) could never be his only son.