The picture on the left is Maqbaratul Baqee is the main cemetery of Madinah. Buried there are many members of the Prophet’s (s.a.w.) close family, around ten thousand of his companions (Sahabah) and many prominent, pious personalities.

The chief graveyard of Madinah is known as “Jannah tul Baqee” or “Maqbaratul Baqee”. It enjoys the status of being the first Muslim graveyard of Madinah. Several family members of our beloved Prophet (SAW) have been buried in this graveyard. Maqbaratul Baqee is the final resting place of several thousand Sahabah (Companions of Our Prophet [SAW]), too. Many other well known devout Muslims have the honor of being buried here, too.

The site for graveyard was selected by Our Prophet (SAW) himself soon after he migrated to Madinah when one of his Ansar Sahabah, As ‘ad Bin Zararah (RA) passed away. The graveyard was close to the Masjid-e-Nabwi. 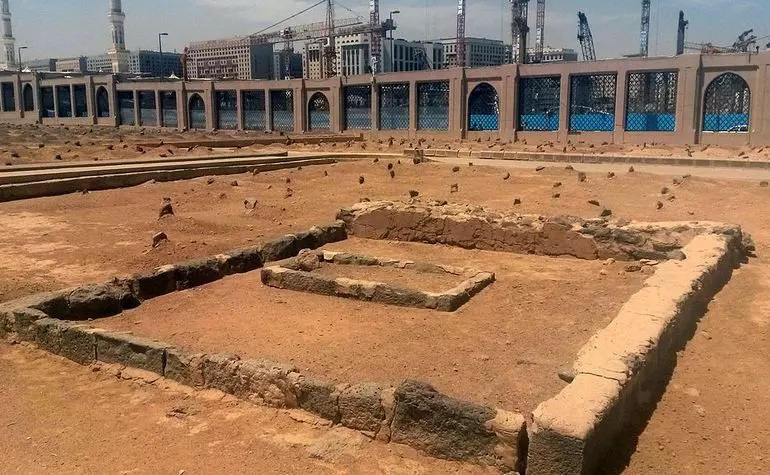 At that time, the ground of the graveyard was completely covered with a thorny bush called “Gharqad” in Arabic. Thus, the graveyard was called “Baqee ul Gharqad”, which means the land of Gharqad. Later, it got famous by the name of “Jannah tul Baqee” or “Maqbaratul tul Baqee”.

Ayesha (RA) reports: “Rasulullah (SAW) kissed the forehead of ‘Uthmaan bin Maz’oon after his death. At that time tears were flowing from his eyes”.

Commentary
This great Sahabi was a foster brother of Our Prophet (SAW). He was the thirteenth person to accept Islam in its early stages. He first migrated to Abyssynia then to Madinah. He was very pious and devoted. At the time when it was still lawful to drink intoxicants, he had already abstained from imbibing it, He was the first among the Muhajireen to pass away. He passed away in Sha’baan in the second year hijri and was buried in the Jannatul Baqee.[1]

Jannatul Baqee is mentioned in various hadiths, particularly in hadiths that teach us what to do when visiting graveyard. For example,

Chapter : What is to be said while visiting the graveyard and the supplication to be offered for the dead lying in the graves.

‘Ayesha (RA) reported (that whenever it was her turn for Allah’s Messenger [SAW] to spend the night with her) he would go out towards the end of the night to al-Baqee’ and say: Peace be upon you, abode of a people who are believers. What you were promised would come to you tomorrow, you receiving it after some delay; and God willing we shall join you. O Allah, grant forgiveness to the inhabitants of Baqee’ al-Gharqad. Qutaiba did not mention his words: “would come to you”. [2]

Another hadith shows that Our Prophet (SAW) was asked to pray for the people of Baqee.

Chapter : What is to be said while visiting the graveyard and the supplication to be offered for the dead lying in the graves.

Muhammad b. Qais said (to the people): Should I not narrate to you (a Hadith of the Holy Prophet) on my authority and on the authority of my mother? We thought that he meant the mother who had given him birth. He (Muhammad b. Qais) then reported that it was ‘Aisha who had narrated this: Should I not narrate to you about myself and about the Messenger of Allah (may peace be upon him)? We said: Yes. She said: When it was my turn for Allah’s Messenger (may peace be upon him) to spend the night with me, he turned his side, put on his mantle and took off his shoes and placed them near his feet, and spread the corner of his shawl on his bed and then lay down till he thought that I had gone to sleep. He took hold of his mantle slowly and put on the shoes slowly, and opened the door and went out and then closed it lightly. I covered my head, put on my veil and tightened my waist wrapper, and then went out following his steps till he reached Baqee’.

He stood there and he stood for a long time. He then lifted his hands three times, and then returned and I also returned. He hastened his steps and I also hastened my steps. He ran and I too ran. He came (to the house) and I also came (to the house). I, however, preceded him and I entered (the house), and as I lay down in the bed, he (the Holy Prophet) entered the (house), and said: Why is it, O ‘Aisha, that you are out of breath? I said: There is nothing. He said: Tell me or the Subtle and the Aware would inform me. I said: Messenger of Allah, may my father and mother be ransom for you, and then I told him (the whole story). He said: Was it the darkness (of your shadow) that I saw in front of me? I said: Yes. He struck me on the chest which caused me pain, and then said: Did you think that Allah and His Apostle would deal unjustly with you? She said: Whatsoever the people conceal, Allah will know it. He said: Gabriel came to me when you saw me. He called me and he concealed it from you. I responded to his call, but I too concealed it from you (for he did not come to you), as you were not fully dressed. I thought that you had gone to sleep, and I did not like to awaken you, fearing that you may be frightened. He (Gabriel) said: Your Lord has commanded you to go to the inhabitants of Baqee’ (to those lying in the graves) and beg pardon for them. I said: Messenger of Allah, how should I pray for them (How should I beg forgiveness for them)? He said: Say, Peace be upon the inhabitants of this city (graveyard) from among the Believers and the Muslims, and may Allah have mercy on those who have gone ahead of us, and those who come later on, and we shall, God willing, join you. [3]

Just imagine that Our Prophet (SAW) repeatedly asked for the forgiveness of the people of Baqee! The list of all these lucky people is quite long but the names of some important people are:

1. With the exception of Khadijah bint Khuwaylid (RA) and Maymuna bint al-Harith(RA), all other wives of Our Prophet (SAW) are buried in Baqee. These two wives were buried in Makkah and Sarif respectively.

2. Several children of Our Prophet (SAW) are buried in Baqee. These include: The daughters Fatima (RA), Ruqayyah (RA), Zainab (RA) and Umme Kulthum (RA); the son Ibraheem (RA)